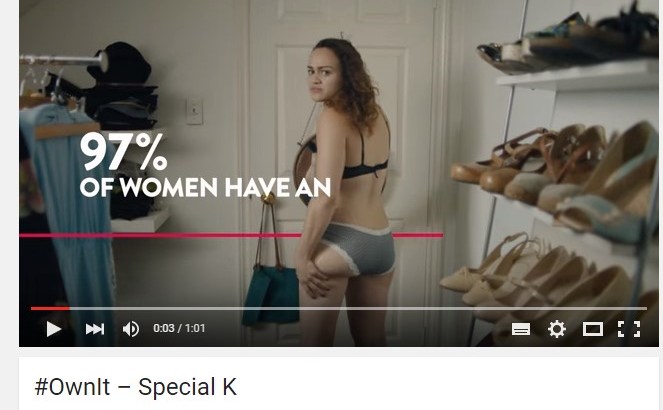 Honestly, I could dedicate a whole blog to just critiquing and lambasting on the cultural turds that corporate America keep dumping into the media-sphere. It’s like endless mind sewage.

The latest is Kelloggs, who assume we are all really stupid, with its recent viral video getting 5 million views; perhaps they are right. Once again we get yet again another “corporate viral video.”  These contrived warm fuzzies are a new strain of the cultural venereal disease of advertising. In it, we get Kellogg’s, the 14 billion dollar crappy food behemoth, attempting to be the Dove of sugary breakfast cereals.

After I assume paying an advertising company millions of dollars they have come up with is a slick viral ad with the hashtag “#ownit.” The short 60 second video tells women that they should stop worrying about how they look and “own” who they are. That is after they stuffed their face with Special K…such a powerful message.

Fact: 99.99% of these ads are so contrived and disingenuousness it basically beggars belief. Of course they make sure every demographic is featured, young women, old women, middle aged women, dark skin, pale skin, gay, straight, skinny, overweight, disabled etc.. Seeing it’s so weird to see normal people in advertisements, people automatically think, “wow that’s so good.” Leaving, out of course, the fact that Kellogg’s  are an integral contributor to the very same advertisement culture that makes that the case. If you look at all previous Special K advertisement they feature attractive and slim models that reinforce all the stereotypes of shallow beauty this “#ownit” campaign claims to work against.

Can we expect to see an amputee or overweight African American woman in its next Special K ad?

At key moments of  the video we see (of course)  a box of “Special K”  here and there. The somber “facty” part of the clip then moves into the empowering girl power “own it” finale. In particular “own” a box of Special K. They are cynically in trying to subconsciously pair feeling good about yourself with sugary bran flakes in a box. That’s it, just like Dove tries to do the same with beauty products. How much they genuinely care is equal to the rest of corporate America…zero. Similar to the way they care about kids in 2013, The Kellogg Company has agreed to pay $4 million dollars to settle a class action lawsuit regarding a misleading advertising campaign for its popular Frosted Mini-Wheats cereal. In 2008 and 2009, Kellogg’s claimed that Mini-Wheats could improve kids’ attentiveness, memory, and other cognitive functions — even though the sugary cereal doesn’t actually have any of those positive effects. Unless however, it was a cross-promotion with Ritalin, but hey who knows.

They only give a shit about people buying more of what they are selling and are craftily willing to tug on people’s heart strings in order to achieve that. It’s a tried and tested formula that help both to sell products and increase a brand’s good will. Meanwhile the world’s obesity epidemic is increasing and Kelloggs, along with other food giants, is spending millions of dollars lobbying congress for less transparency on food labelling. Thus using their billions in profit to buy political influence not for the greater good of the public but for their own profits. Should we expect anything less from corporate Americans? It seems not.

Let’s say no to manipulative and insulting campaigns like this. Let us take charge of how our children see themselves. The gall of companies like Kelloggs, to dare try lecture a solution to women’s self-esteem, when they are one of the many engineers of the problem. That voice they claim in the video women need to shut off, they are the ones amplifying this critical voice in every single advertisement they run, with the exception of this contrived feel good fandango. The utter nerve of them is beyond me and how people fall for it is just as baffling.

Like the weapons manufacturer, Lockheed Martin, bidding for the tender to build hospitals in Iraq after destroying the country with the bombs they sold. Un-fucking-believable. Call me cynical but fuck Kelloggs and fuck Special K.